In this article we interview Travis who has put together a unique punching workout drill, which involves fighting without getting hit. With this unique Head Movement Training Program you'll master the art of becoming so illusive that any opponent that has the misfortune to face you in a real street fight will think twice about pursuing a brawl.

This routine features a unique number system where Travis calls punch combinations like a drill instructor, connected to your left and right hands. This challenges your coordination and ability to think on your feet and apply the techniques quickly, whether that be crunching your obliques and bobing and weaving, or working in a reverse stance and slipping out of the range of a punch and throwing in a couple of combinations yourself.

Oh and btw here is a picture of Trav before and after pursuing this training program: 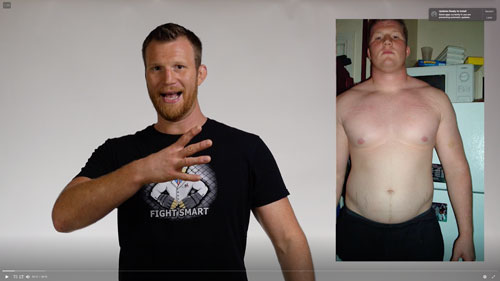 This training is a blessing in terms of changing up from standard run-of-the-mill-exercise-programs. It's unorthodox, yet fun and in real world self defense and fighting terms its practical in so many ways. It is a full body workout, and challenges the core and obliques (love handles).

The more you do it, the more intense you can work it. Plus you have your own workout instructor (Trav) blasting out instructions to you and keeping you in check. The beauty of this is that it can be done in the privacy of your own home and no equipment apart from a smartphone or computer to play the audio file is needed.

Hi Trav. Eddie here from XBoomFitness.com I first came across your head movement program on that shiny old funbox called Youtube. You were walking about cities like a man possessed asking anyone and everyone to punch you in the face, as you schemishly dodged their raining punches with your slippery, effective head movement skills.

How did you ever get to a position where you felt confidant to walk up to a complete stranger not knowing anything about their punching prowess and ask them if they wanted to punch your right in the pie hole?

Hey Eddie.  Well, to be quite honest, the first time that I ever attempted to dodge 'non-stop punches' was in a dungeon-like boxing gym deep in the heart of North Philadelphia.  My boxing coach brought me to some gym, grabbed a guy working on the heavy bag and say, "Hey... can you swing on mah man Trav?"

A minute later, we were in the ring and a relatively jacked boxer was winging punches at my head... but not really hitting a damn thing.  After 2 exhausting minutes, I was unscathed... and the whole thing kinda clicked.  It was almost like Karate Kid, after Daniel San had "Wax on / Wax off'ed " Mr. Miyagis fleet of cars for countless hours, only to find that the same exact movement was capable of deflecting attacks, and he had already burned it deeply into his muscle memory.

At this point, fighting took on an entirely new context.  It was a hell-of-a-lot easier to 'not worry' about getting hit, when I believed in my ability to dodge the strikes instinctively.  So, after some time, handing some gloves to the average guy on the street wasn't even on my radar.  It was just for funzies.

At the end of the day, if you get reps of the RIGHT MOVEMENTS, the whole game of self defense and MMA completely changes.

Tell us a bit about your background Travis and what you overall objectives for putting this program together were.

I used to be a professional pot salesman, which allowed me to not have real job, and train all day.  As such, I was able to sustain a brief career as a low-level pro MMA fighter, who promptly retired after getting caught.  Not having any other marketable skills, I started a 'private MMA training business' out of my garage, and ended up instructing about 7 hours of boxing, kickboxing, and Jiu Jitsu... every day.  Working with average folks all day made me keenly aware of the mistakes that almost everyone makes, and I also became aware of exactly what I needed to say in order for them to systematically fix the damn errors.

Why does this lady's hook suck?  Oh... she's not aligning her forearm behind the strike, or even getting close enough make that possible.

Suddenly, there was a little pocket of middle aged moms who could fold a man in half with a roundhouse kick erupting in Red Bank NJ... but my hands were shaking violently when I tried to read a Maxim on the s*1tter in peace.  My body started breaking down from the abuse that my students were capable of inflicting, and I realized that it was unsustainable.

This made teaching online my only other feasible method of 'making it big'.

The 'head movement on a street' thing was just a random idea that I had for entertaining content... and I guess it worked!

My website is primarily aimed at men and women in their 30s-40s and over. For someone who's been out of shape for a long while, is your head movement program suitable for them?

If you want to get in shape, you have to exercise.  Period. Everyone knows this; it's painfully obvious, and it's even more painful at times to execute because fat-burning exercise is BORING.  Cardio, in many cases is a test of your ability to sit in the hamster wheel for 40 minutes... every day.

Good luck entertaining yourself with your thoughts... or a fresh playlist.

But, what if you were thinking about a skill?  What if you were focused on your shoulder rotation on a punch, and each rep making it slightly faster, or even sending it through a slightly greater range of motion.  Then you're presented with another skill... and another.

There's no TIME to be bored because your damn brain is engaged.

You're actively trying to replicate the scripted movements that BUILD A SKILL.  First it's 'wax on wax off', but a minute later it's 'paint the fence', and a minute after that it's 'sand the floor'.  Unlike Daniel San, you will have the benefit of knowing what you are building and why you are building it.

Nobody every built a self defense style on an elliptical machine... or a damn tread mill.

AND, unlike every other martial art in the universe, when you're doing specifically Head Movement... when it's done correctly, you don't TOUCH ANYTHING.

You don't need a heavy bag to simulate a body.  You execute the movement, and watch the imaginary punch whiz right over your head.

Is this program good for self defense?

What i like about this program is that i have no interest in being a professional fighter, but the fitness drills, the bobbing and weaving, the shadow boxing and fun aspect, are all very appealing. For someone who never intends to step into the ring, could this routine make you an effective fighter without sparring with a partner?

Again, it will make you dramatically harder to punch... which automatically jacks up your chances of winning, but we also program your counter strikes with the head movement.

Do that 2 or 3 times, and you won't actually have to "finish" the fight.  The guy will find an excuse to quit in most cases (if you want to let him 😉

Coming from a non striking background i found my co-ordination extremely challenged once i first started applying the head movement techniques. I did find myself getting better the more i practiced. How often do you think someone should practice this per week, and if they really have two left feet and are struggling to keep up, is there any hope for them?

If you don't want it, then you won't care enough to push through the 2 or 3 first days of frustration.

If you DO want it, and you're not afraid to step up, feel uncomfortable, and demand success from your body, then you'll do amazingly well.  The first time that you nail a movement, and it feels fluid, and effortless, and you know it would have ghosted a punch, you will be hooked... and driven purely by the motivation inherent in your success.

The first time you feel the abs under your ribs starting to come alive and poke out a bit, the motivation game becomes easy... but can you make it the first two weeks?  Can you BUILD A HABIT.

Everyone is obviously capable... just don't be a wuss.  If you want it, take it.

Do you need to have any prior boxing, or striking skills to follow this plan?

Absolutely not (as you already know).  Everything is built from square one, and to be honest, there are plenty of pro fighters who need to circle back and fix all of the crap that they built incorrectly.

Coming from your background in MMA, what else could you recommend our readers could get involved with to increase confidence, fitness, and all round defense skills.

Fitness can obviously be accomplished in a hamster wheel... so... do whatever you want to do.  If you feel a thrill riding helmet-less on the road side, you'll be more successful doing that than dragging yourself to a boring-ass piece of equipment.

Regarding confidence and it's role in self-defense. EITHER YOU BELIEVE IN YOUR ABILITY TO WIN, OR YOU DON'T.  If you haven't done the work, why would you think that you're any more likely to win than the guy who is staring you down?

Do you have a weapon that you know would devastate someone?

If you haven't done the work to build one, how can you be confident?

Are you LESS LIKELY TO BE HIT than the dude you are flailing at?

If you haven't done the work to be elusive, how can you be confident.

Either do the work, or don't... but you're going to remember the choices that you made the moment that someone smacks your hypothetical girl on the buttocks... or pushes your kid... or gets out of his car, inspired by road rage.

I know what I'm going to be doing for my cardio today...

Get in touch here

We use cookies to ensure that we give you the best experience on our website. If you continue to use this site we will assume that you are happy with it.Ok